The Maine Antique Digest was started by Sam and Sally Pennington in Waldoboro, Maine, in 1973 and is still published from a building in the small downtown village on the midcoast of Maine. The first issue was mailed to five subscribers in November 1973. The newsstand price was 50 cents, and an annual subscription was $5.

Sam (1929-2008) and Sally (1931-2019) met when he was a 28-year-old Air Force navigator stationed at Carswell Air Force Base and she was a schoolteacher in Fort Worth, Texas. Not long after they were married in 1958, they bought a Federal house in Waldoboro, thinking that Sam would soon leave the Air Force. Instead, he stayed in the service until 1973. For a while when Sam was stationed in Bangor, Maine, in the 1960’s, he and Sally were part-time antiques dealers. They started talking about starting an antiques newspaper while Sam was stationed in Goose Bay, Labrador, just before his retirement from the Air Force. After Sam, Sally, and their five children moved to Waldoboro in 1973, Sam began writing for the short-lived Maine Antique Guide. Sam and Sally soon decided to start their own publication, and the first issue was put together on their dining room table. 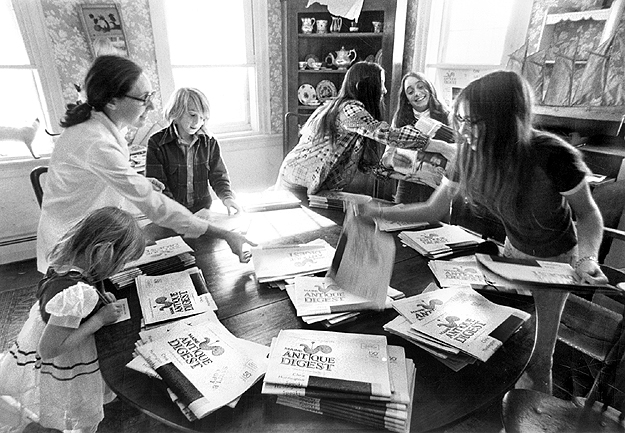 All five Pennington children have worked for the paper at one time or another. Today the paper is headed by two of them, Clayton and Kate. M.A.D. employs 11 staff on site, plus Lita Solis-Cohen in Pennsylvania, and a fleet of freelance reporters and columnists.

M.A.D. continues to be a must-read for those who are serious about the antiques market, particularly Americana. There is no other publication quite like it, with its reports on shows, auctions, and other market news from across the United States and Canada and a long-running column on the London market. Regular columnists and staff write Beneath the Surface, Antique Jewelry & Gemology, Exhibitions, Books Received, and Auction Prices Realized (snippets of auction results). The Meeting Place features letters to the editor, club and association news, obituaries, and more.

Maine Antique Digest is published monthly in newsprint and digital formats. Subscriptions are $43 a year.