A friend recently posed a rhetorical question: “Is there any such thing as a little country auction anymore?”

My knee-jerk response was that there are not and something to the effect that online auctions have supplanted them. Upon reflection, I wish to walk that back a bit. Several years ago I opined on these pages that the changes we are experiencing in today’s auction world have very little to do with antiques; rather, it is the delivery systems used to move them in and out of the marketplace that are changing. Changes in those delivery systems were hurried along by the pandemic, but it was inevitable that we would reach the point where we find ourselves today.

The recent online-only auction presented by Laughlin Auctions of Edinburg, Virginia, is a case in point. The sale consisted of 1028 lots and ran August 18 to 24 using the HiBid platform. Before the pandemic, the firm had conducted very successful large “old school” sales, using three auctioneers calling bids simultaneously in its three-gallery facility. Having 1000-plus lots is not unusual for a Laughlin sale. In those days no presale estimates were provided. Telephone and absentee bids were rare. There was no way to place an online bid. There were no printed catalogs other than an occasional list of the order in which the crocks or firearms might be sold. In addition, Laughlin charged no buyer’s premium. In other words, these were old-style country auctions, with the only concession being that they were inside, out of the weather.

The pandemic changed some of that. Laughlin has now embraced an online platform and now charges a buyer’s premium. Bid increments are set within the platform. But some things have remained the same. There are still no published presale estimates, and the online catalog descriptions are minimal, to say the least.

Thankfully, the element that has not changed is the vast variety of material that is offered. Everything from firearms to toys to coins to garden implements and furniture is there for the bidding. Interesting and amazing treasures are always hidden among the lots, waiting to be unearthed. It is still a country auction, albeit dressed up in today’s technology. The accompanying photos provide a snapshot of the scope of this sale. 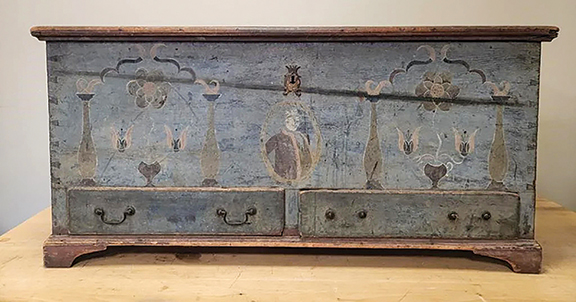 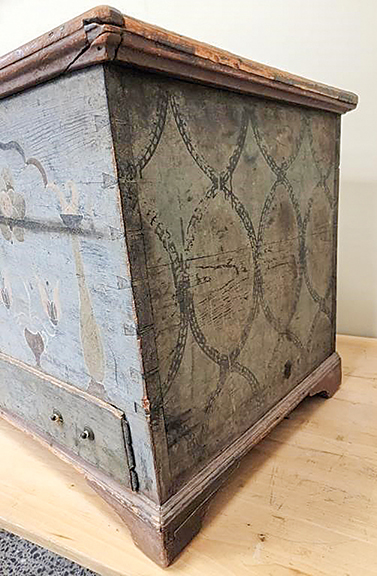 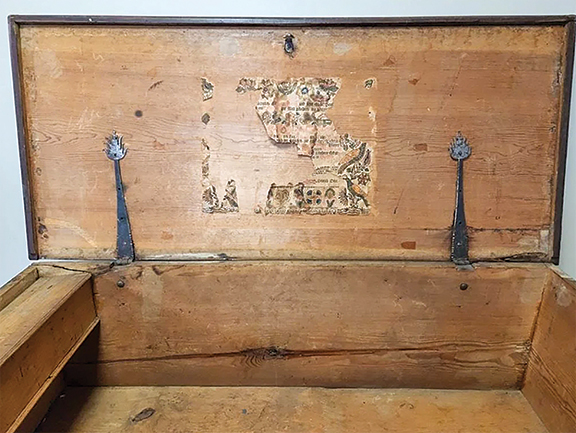 The most-anticipated item in the sale lived up to its billing and easily achieved honors as the high lot at $56,782.50. The paint-decorated yellow pine blanket chest from Shenandoah County, Virginia, is thought to date from the last decade of the 18th century. Its maker is not known. The rectangular lid has a molded edge applied to three sides. The dovetailed case has a deep central well fitted with a valuables till. There are two drawers below. The chest is raised on low dovetailed square bracket feet. The front panel is decorated with a waist-length portrait of an unidentified man, flanked by floral urns and columns. The side panels are decorated with bold interlaced curves and guilloche. The forged hinges and escutcheon have a tulip-like appearance. A fraktur fragment executed by Johann Henrich Otto is attached to the underside of the lid. The overall measurements of the blanket chest are 25" x 52½" x 23".

The star of this show was a late 18th-century blanket chest from Shenandoah County, Virginia. Fixed to the underside of its lid were fragments of a marriage fraktur executed by Pennsylvania fraktur artist Johann Henrich (or Heinrich) Otto (1733-1800). The chest with the fraktur sold for $56,782.50 (with buyer’s premium).

The significance of this lot requires some explanation. In 1981 researchers from the Museum of Early Southern Decorative Arts (MESDA) examined and recorded in their object database a painted blanket chest discovered in Shenandoah County, Virginia. MESDA researchers noticed that attached to the underside of the chest’s lid were remnants of a fraktur. In their report they recorded the following observation: “Fraktur fragments on the lid interior for the marriage of Catherine Bauserman and John Arnst [sic] of Powell’s Fort, Shenandoah County, Virginia.” It is believed that the chest had descended directly within one family since the last decade of the 18th century, having passed from Catherine Elizabeth Ernst (not Arnst) Golladay of Powell’s Fort/Fort Valley, Virginia, to her great-great-granddaughter, whose estate consigned the chest to Laughlin Auctions.

The chest was purchased by auctioneer Jeffrey S. Evans for his personal collection. Evans is researching a group of similar chests that he believes are by the same maker, working in Virginia and specifically in Shenandoah County. According to Evans, the chests under study all have very similar design and construction characteristics. Evans is calling the chests the Column and Star-Flower group. He believes that the design elements of these chests likely originated in Berks County, Pennsylvania. His supposition is that a cabinetmaker from that area may have moved to Virginia and brought with him those distinctive design and construction characteristics. The chest in the Laughlin sale may hold a key to the identity of the cabinetmaker.

But what about the fraktur? Although the document is significantly degraded, enough survives to verify that it is a printed form, and the name Henrich Otto is clearly printed in the lower section. The decorative elements that remain are those commonly associated with Otto’s work. Otto is known to have actively worked in Pennsylvania’s Lancaster and Montgomery Counties during the last quarter of the 18th century. Berks County, one target areas in Evans’s research, shares a border with Lancaster and Montgomery Counties. It is not a stretch to imagine that Catherine Bauserman and John Ernst carried their marriage fraktur with them from Pennsylvania to Virginia and at some point attached it to their blanket chest.

One remarkable aspect of this mystery is the fact that the fraktur on the Laughlin chest exhibits no further deterioration since it was examined and photographed by MESDA researchers in 1981. Comparing the 1981 MESDA photo with the 2022 chest shows that the fraktur is unchanged.

Jeffrey Evans has set no time frame for completion of his research. We have complete confidence that it will be thorough and accurate, and we will report progress on the Column and Star-Flower project as the story develops.

For additional information on the Laughlin Auctions sale, call (540) 984-8080 or see the website (www.laughlinauctions.com). 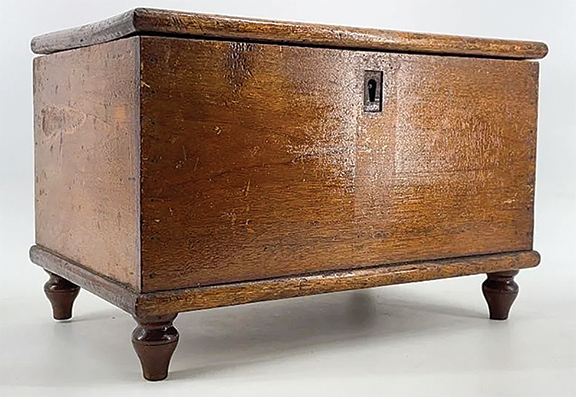 This miniature walnut blanket chest displays box-nailed construction, with the edges of the lid and bottom board rounded and slightly overhanging. The case is raised on turned peg feet. Its internal till appears to have never been fitted with a lid. The original lock and escutcheon are present, but the lid catch is missing. The little chest, 9" x 14" x 8¾", sold for $259.90. 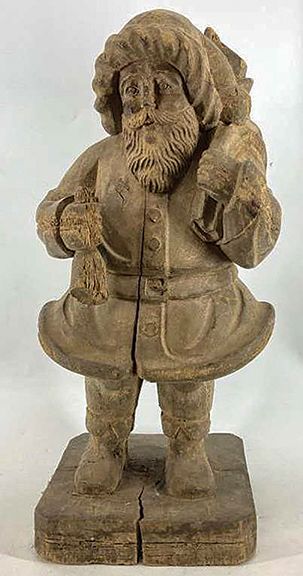 The finely detailed folk-art Santa Claus figure is carved from a single block of wood and retains an undisturbed dry surface. Santa stands 23" high, and the base is 9" square. It sold for $79.10. 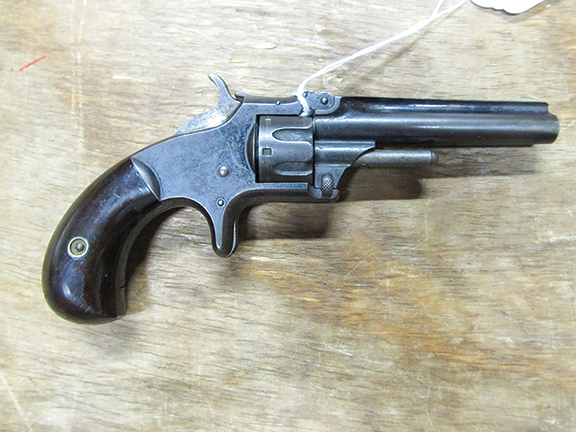 Horace Smith and Daniel B. Wesson entered the personal handgun market in 1857 with their palm-size Model 1 revolver. Smith and Wesson refined the popular pistol over the next few years. This example of the Model 1, referred to as “Model 1 3rd Issue,” displays a serial number that dates it to the last third of that model’s 1868-81 manufacturing life. The pistol is a single-action, seven-round revolver, with a 3 1/16" tip-up barrel and rosewood grips. It fires .22 -caliber rim-fire black powder cartridges. It sold for $192.10. 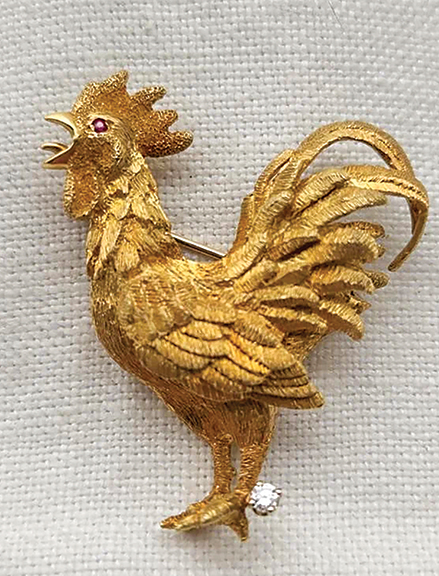 This 18k gold rooster has something to crow about. Its eye is a ruby, and the spur of one leg is a diamond. The 1¾" x 1½" brooch is stamped with its purity, but there is no maker’s mark. It sold for $791. 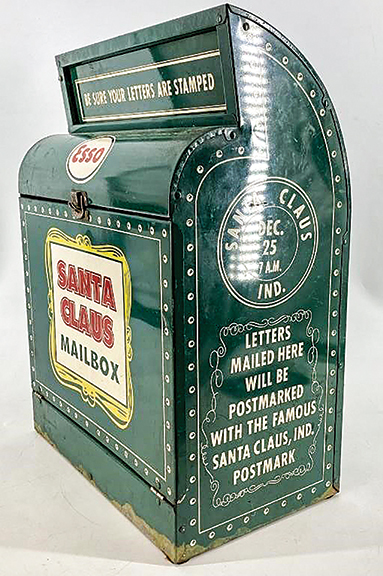 This 1950s Santa Claus Mailbox from Esso is designed to be hung on the wall, likely at an Esso service center. Each side panel is printed with a message stating that letters to Santa deposited in the box would be forwarded so that they would receive the Santa Claus, Indiana, postmark. The 17" x 12¾" x 7¾" box, in overall good condition but with some paint loss along the bottom edges, sold for $146.90. 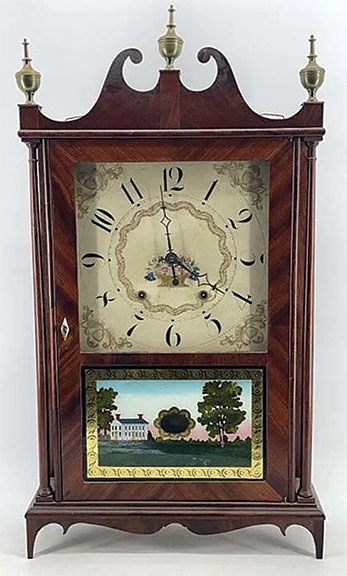 The broken-arch pillar and scroll shelf or mantel clock is by Eli Terry & Sons of Plymouth, Connecticut. The E. Terry & Sons label was printed by Goodwin & Company, dating the clock to 1830 or later. The clock door features an ivory kite escutcheon and retains its lock and key. The glass panel is reverse painted with a residential scene and an oval pendulum window. The dial is painted with Arabic numerals and decorated with an overflowing basket of flowers. The finials are brass. The weights and pulley caps appear to be original. The clock has not been tested. It sold for $1469. 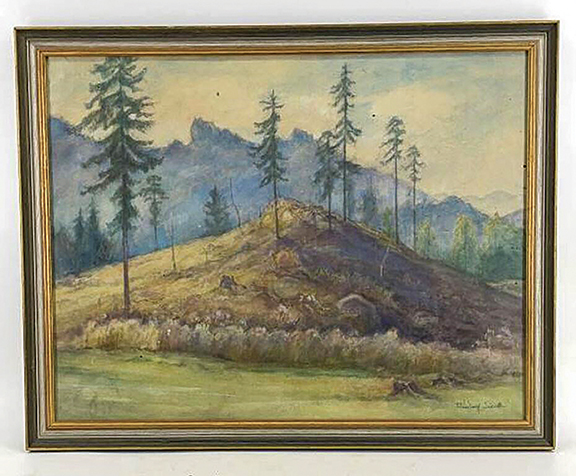 This untitled watercolor by German landscape artist Rudolf Sieck (1877-1957) depicts fir trees on a hillock, with rugged mountain peaks in the background. The painting is not dated but is signed lower right and is framed to 18½" x 23" overall. There are some pinholes in the canvas. It sold for $282.50. 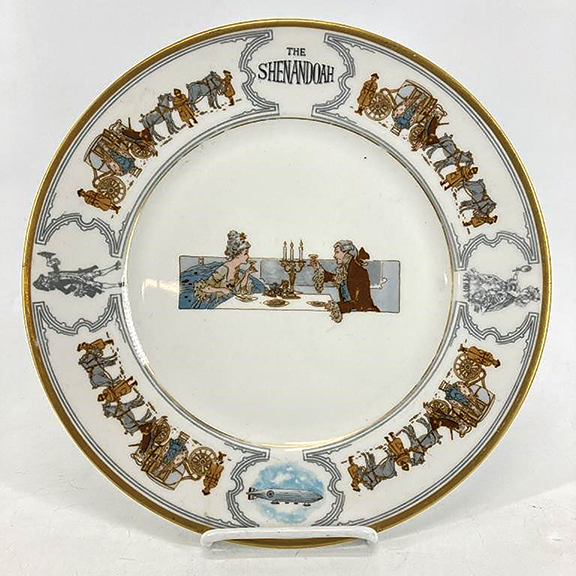 This rare 10¾" diameter plate, circa 1926, is from the dinner service at the Shenandoah Hotel in Martinsburg, West Virginia. The plate is white Lamberton china from Scammell, and with one exception its decorative panels are from the Colonial scenes available through the Lamberton catalog. The lower decorative medallion is unique. It features a custom illustration of a rigid frame airship, presumably meant to commemorate the U.S. Navy’s first such Zeppelin, the U.S.S. Shenandoah (ZR-1). The Shenandoah was commissioned in 1923. After several years and 56 successful flights, the Shenandoah crashed in Ohio the year before the hotel opened. According to Larry R. Paul, a Lamberton expert, there is only one other extant example of the pattern. This plate sold for only $19.78.

The miniature International Harvester tractor Model 2504 with its original box sold for $480.25. The 1/16 scale die-cast model from the mid-1960s retains its original paint. The steering wheel is missing. 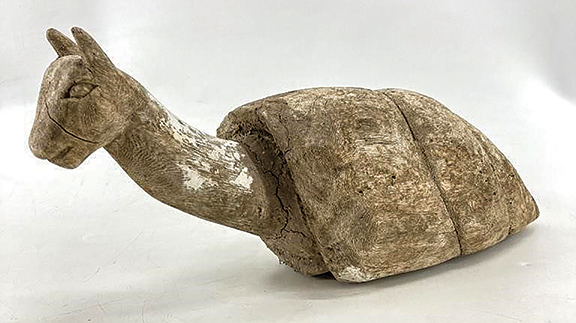 Perhaps this folk-art carving does not look realistic, but it is one of the most original pieces in recent memory. The garden snail, carved from a single piece of wood, is 8" high x 18" long overall. The snail and its shell display a dry natural surface and have remnants of a white residue. The snail sold for $28.25. 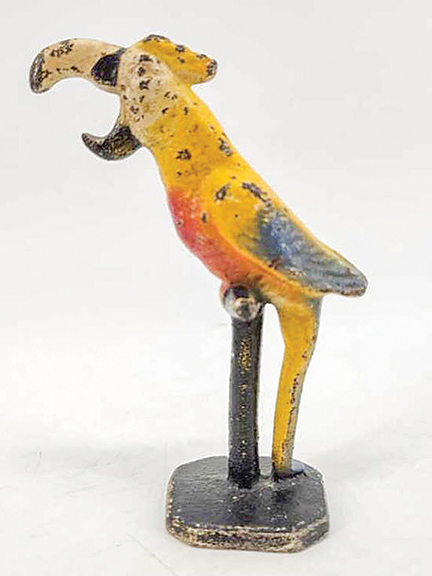 The cast-iron bottle opener in the form of a colorful parrot on its perch does not display any maker’s mark. It stands 5" high overall and retains most of its original polychrome surface. Likely from the 1940s, it sold for $50.85. 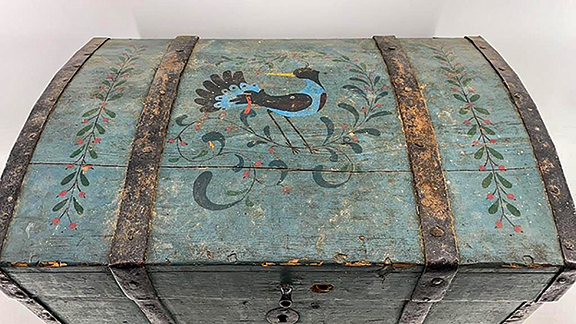 The lid of this diminutive blue-painted dome-top wooden chest is decorated with a large stylized bird, flanked by floral sprigs. The chest is trimmed with wrought-iron straps. The two medial straps are not only decorative; they are the tails of the chest’s hinges and completely surround the chest. There is an internal lidded till. The forged handles are attached with snipe-style fasteners. The 10½" x 19" x 13" chest sold for $56.50. 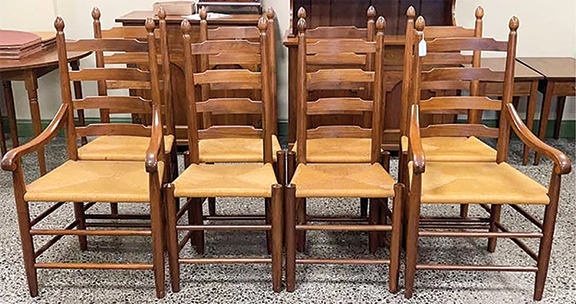 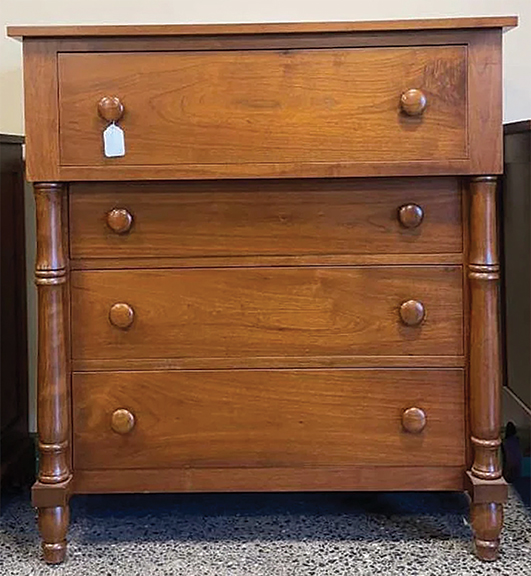 Clore, formerly E. A. Clore & Sons, is a well-respected regional furniture maker located in Madison, Virginia. The firm was founded in 1830 and survives today as a family business. Clore’s classic styles have seen few changes over its nearly 200-year history. Those styles and the firm’s attention to its materials and construction techniques have made Clore products prized by their owners. They are handed down as family heirlooms and highly sought after in the secondary market. Two Clore lots performed very well at the Laughlin sale. The set of eight ladder-back chairs in walnut with rush seats brought $2203.50, and the Empire-style walnut chest of drawers, with a deep overhanging top drawer over three graduated drawers flanked by full turned columns, sold for $960.50. 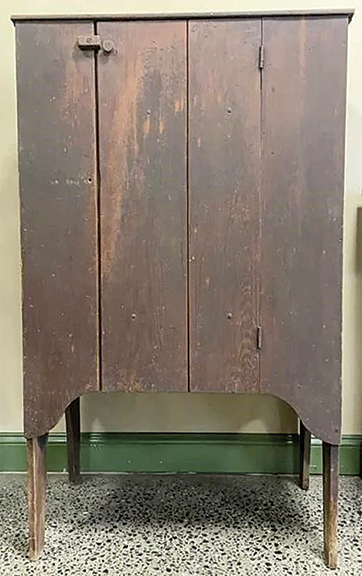 This primitive jelly cupboard was one of the sale’s most actively contested lots. The cupboard features simple nailed construction with tall rounded bootjack ends. The board-and-batten door opens to reveal five fixed shelves. The 54½" x 32" x 22" piece retains its original worn brown-painted surface and sold for $2203.50. 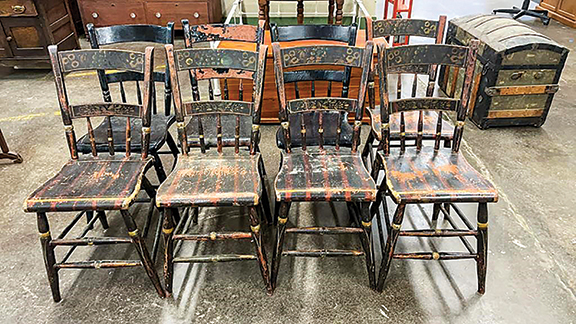 Three of these eight plank-seat thumb-back farmhouse chairs have been painted black. Five retain at least a portion of their original decorative scheme: black and red paint with gold or yellow accents. The medial back splats display a stenciled floral design. The top rails appears to show a combination of free and stenciled designs. The chairs appear to be structurally sound. The set sold for only $36.73.