Day one featured the collection of Luis F. Arroyo along with additions from other collections and estates. Arroyo’s collection included fine folk portraits by such early artists as Ammi Phillips, Sheldon Peck, Erastus Salisbury Field, and Ruth Henshaw Bascom that bidders bid on eagerly. 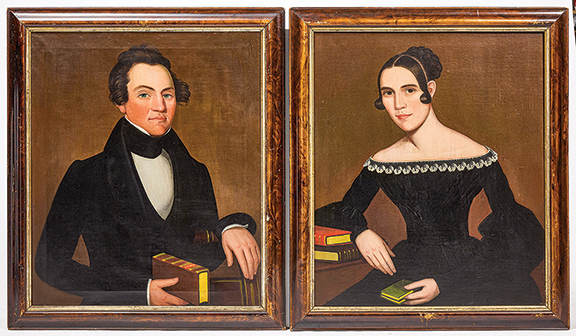 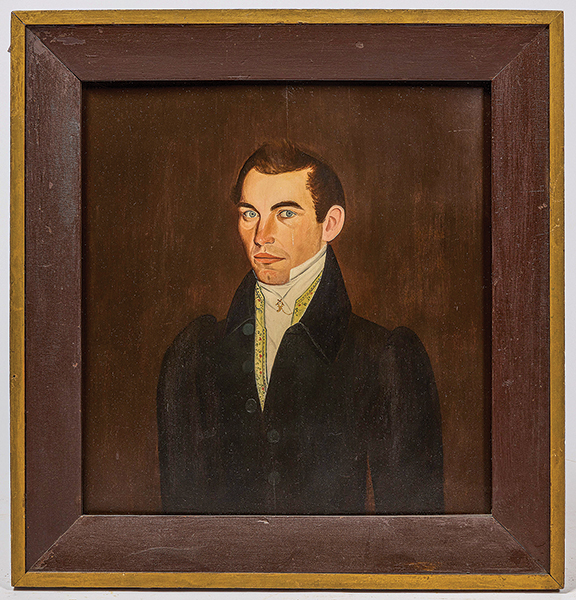 This portrait by Sheldon Peck (1797-1868) of a young gentleman from Port Henry, New York, in a colorful vest sold for $18,600 (est. $8000/15,000). The 24" x 23" (sight size) oil on wood panel, circa 1830, has a distinguished provenance. It sold in August 2005 at Northeast Auctions’ sale of the collection of Horton Foote for $40,600. Before that it was part of the collection of Herbert Waide Hemphill, and even earlier it was in the collection of Barry Cohen. It was on view at Heritage Plantation of Sandwich and the Museum of American Folk Art in 1974; the Hudson River Museum, the Whitney Museum of American Art, and the Abby Aldrich Rockefeller Folk Art Center at Colonial Williamsburg in 1975; the Munson-Williams-Proctor Arts Institute in 1975-76; and the Flint Institute of Arts and the Illinois State Museum in 1976.

A pair of Phillips portraits made $13,640 (with buyer’s premium), while a Peck portrait of a young man that had been in the collection of Horton Foote and had a long exhibition history brought $18,600.

Day two featured work from various estates and collections. New Haven Auctions is careful in its lot descriptions. If an object is described as in fine condition, it’s safe to say it is. On both days, the variety and scope of early objects in original paint and in excellent condition rewarded bidders. 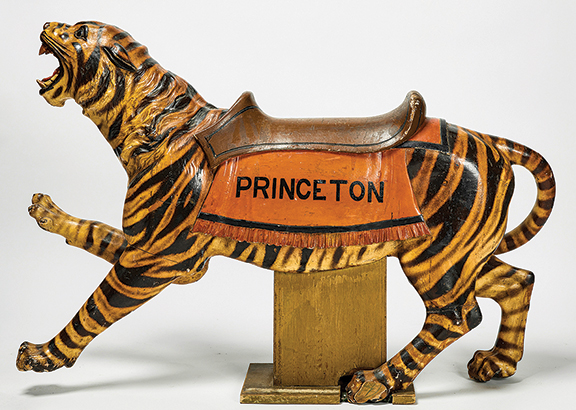 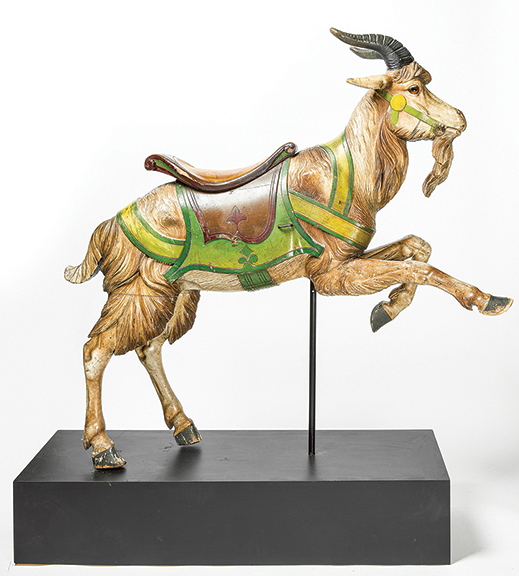 The two highest prices were for carved and painted carousel figures. One was a tiger wearing a saddle blanket that read “Princeton.” It was made by the Philadelphia Toboggan Co. around 1910 and brought $21,080. A goat carved by Salvatore Cernigliaro for the Dentzel company brought a bit more at $23,560. 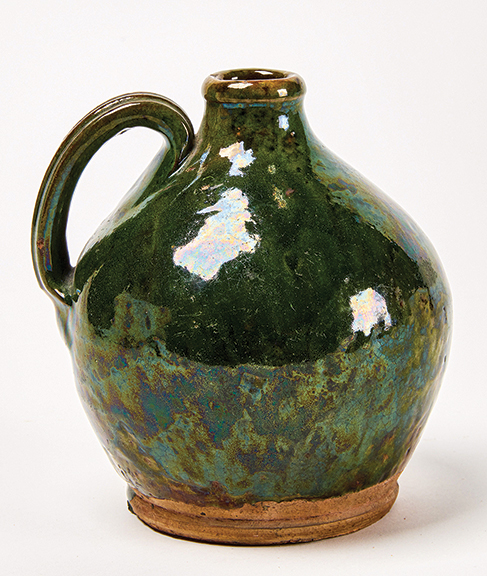 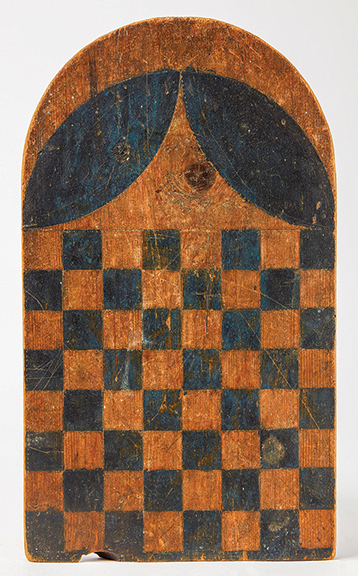 From a tavern, the early 19th-century checkerboard, 18¾" x 10¾", in the original blue paint, realized $4030 (est. $300/600). The single pine board was made in New England and was acquired from Robert T. Foley. Although the Foley collection was sold at New Haven Auctions in April 2021, this checkerboard was not part of that auction. 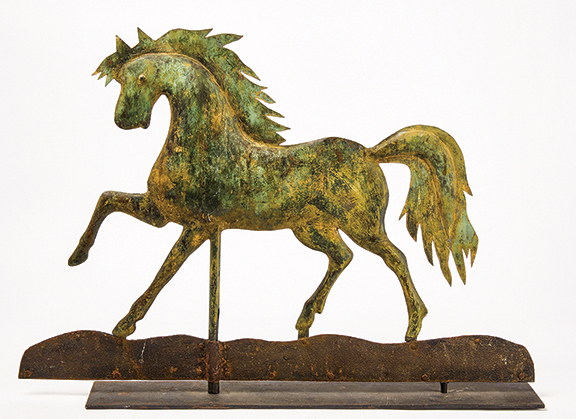 This prancing horse, a 30½" long molded and sheet copper weathervane by A.L. Jewell, Waltham, Massachusetts, brought $6820 (est. $2500/4500). Dated to around 1875, the vane has had some restoration. The Jewell company was one of the first makers to produce made-to-order vanes in various animal forms. 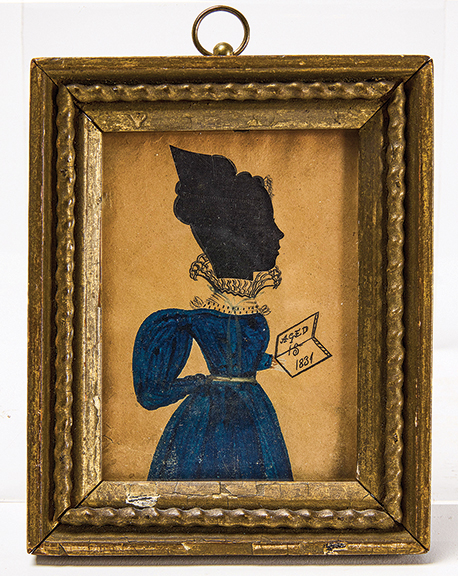 Attributed to the Puffy Sleeve Artist, this miniature silhouette of a young woman holding a paper inscribed “Aged 15 1831” hangs in a period frame thought to be the original. Estimated at $2000/4000, the 3 5/8" x 2¾" (sight size) portrait brought $6200. An inscription on the back reads “Adelia Miller Sherman / to be given to [illegible].” 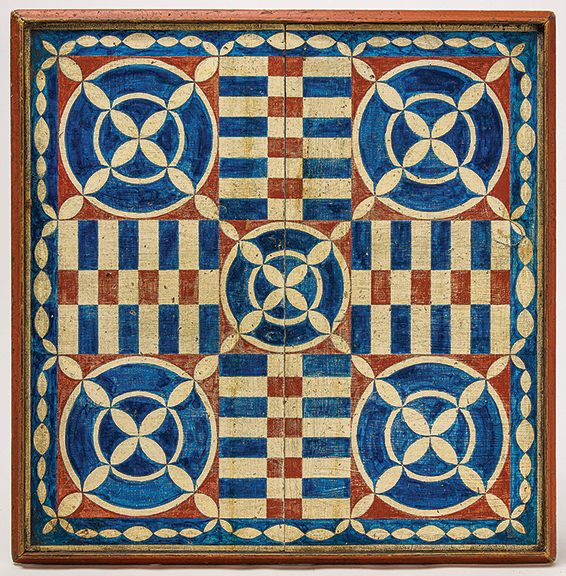 The 19th-century Parcheesi game board in original paint in an inventive design is painted on both sides, although the secondary side, not shown, may have had overpaint. Estimated at $1500/2500, the 23¾" x 24¼" game board brought $13,640. 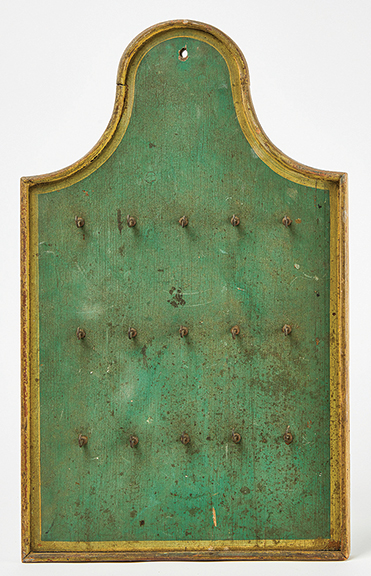 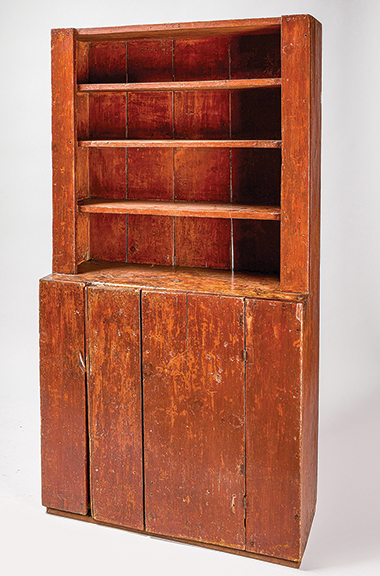 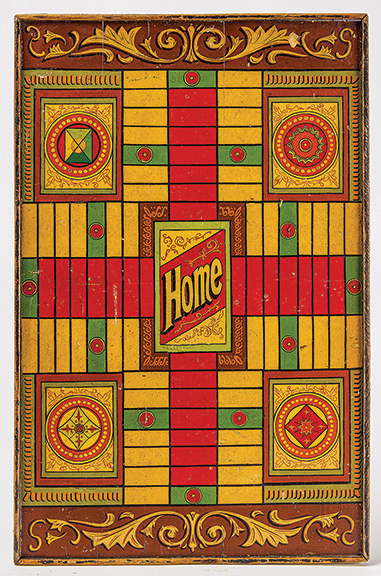 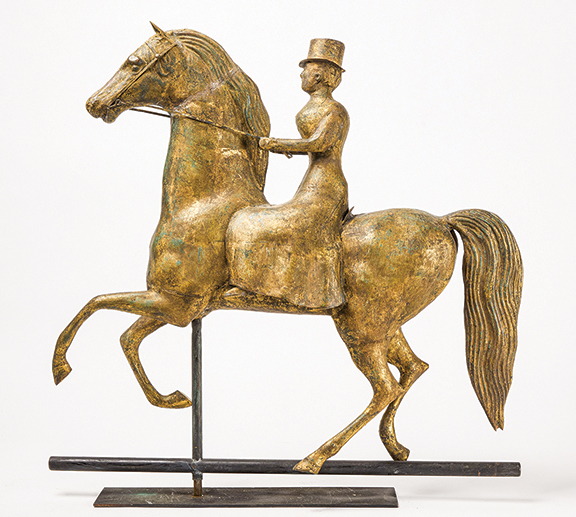 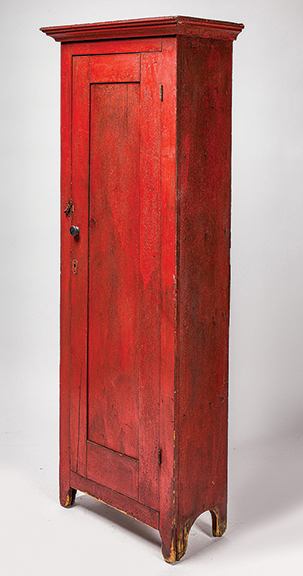 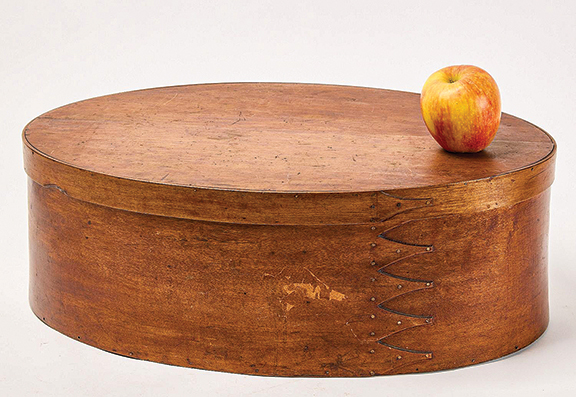 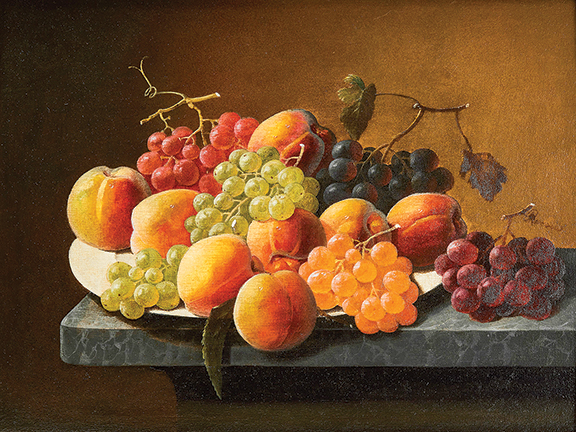 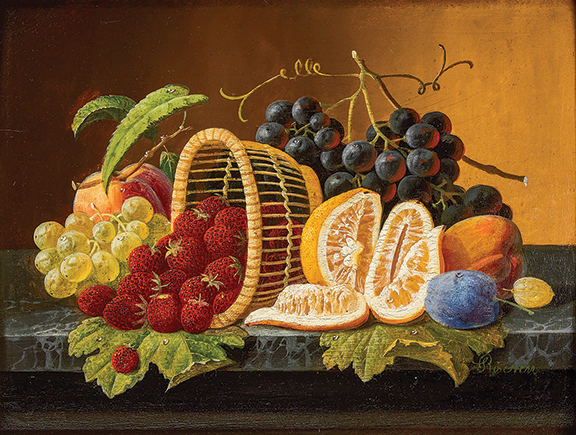 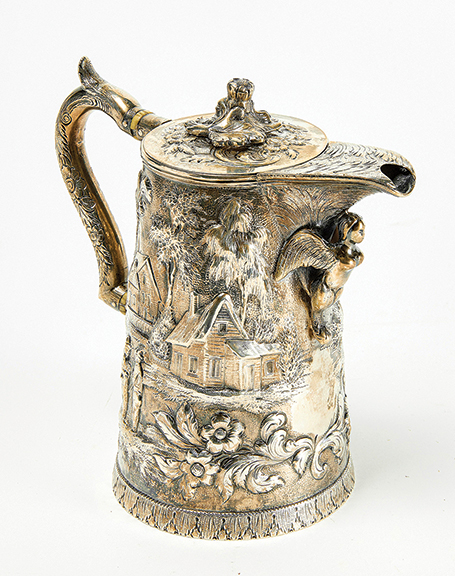 One of the last lots of the two-day auction was a coin silver syrup pitcher by S. Kirk & Son that brought $4030 (est. $200/300). Standing 7" high with a 4" diameter base, it is decorated profusely with a village scene with domestic animals, floral elements, an angel below the spout, and two people. Its total weight is 18.335 troy ounces. 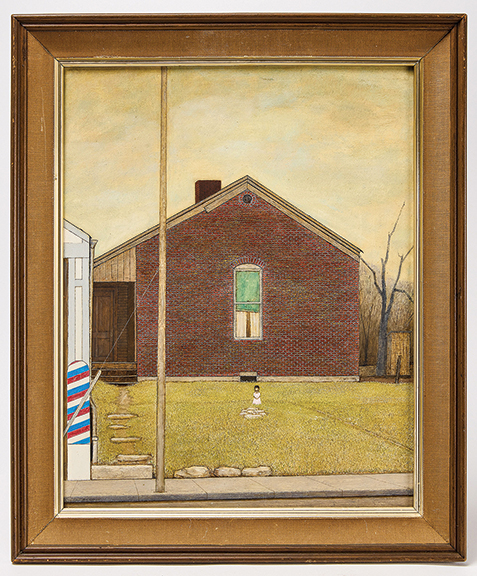 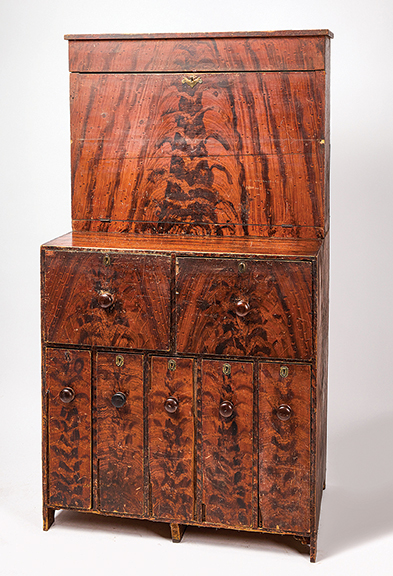 The two-part storekeeper’s desk in original paint decoration, circa 1840, came from Maine. The upper part drops open to shelves above a writing surface, and the bottom is a bank of five locking drawers. Estimated at $500/1000, the 76" x 41" desk sold for $1860.