Ararity Auctions, Lorton, Virginia, recently held a 134-lot online-only sale of special decorative smalls. The sale closed April 17 on the LiveAuctioneers platform. Ararity conducts a seemingly endless series of these comparatively small, targeted boutique-style sales. Similar size sales over the past months have targeted other precise categories and audiences, such as vintage guitars and amps, audiophile vinyl LPs, and mid-century modern furniture and accessories. Ararity Auctions seems to be very comfortable with this format and divides incoming consignments among the appropriate upcoming sales.

This sale certainly lived up to its billing. At the risk of mixing metaphors, if smalls are not the lifeblood of the antiques trade, the category is certainly the meat and potatoes that keep many dealers healthy and moving forward. There is no doubt that a Philadelphia highboy, a piece of Paul Revere silver, or a paint-decorated blanket chest might command high prices, and such sales are welcome additions to every dealer’s resume, but the day-to-day business of all dealers involves smalls.

There is no hard and fast definition of what constitutes a small. They are not necessarily small in size, but they are by and large standalone items that can be added to any collection or fit within any decorative scheme. They may be one-of-a-kind or the last remaining piece of a once-treasured set. Each has a beauty and presence that can be enjoyed on its own merits. Detractors may refer to them as “dust catchers,” while the trade prefers to view them as objets d’art. They may be overlooked by the casual antiques enthusiast, but they are never under-appreciated within the antiques world.

However they may be defined or viewed, smalls make up an important part of the antiques industry. As a category smalls deserve their own stage. 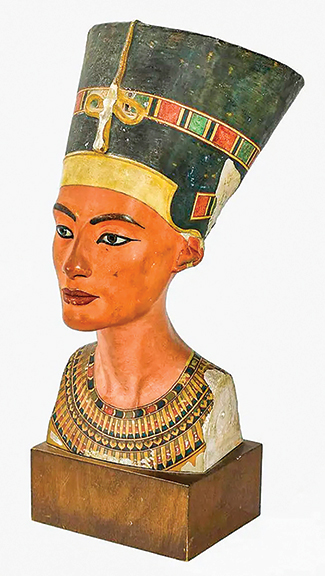 The high lot of the sale was this replica plaster bust of Egyptian Queen Nefertiti (New Kingdom, 18th Dynasty, 1550-1292 B.C.E.). The original bust was created circa 1340 B.C.E.  and is now one of the most popular attractions at the Neues Museum, Berlin, Germany, in the museum’s Nefertiti collection. This casting dates from the first half of the 20th century and replicates the original bust, complete with areas of repaired damage. It differs from the original only in that the queen’s proper left eye has been repaired and repainted and a small seal has been added to the back. The German language seal translates to “Gypsum Molding / State Museums in Berlin.” The bust sold for $2144 (est. $500/700).

The top lot of the sale was a replica plaster bust of Egyptian Queen Nefertiti, dating from the first half of the 20th century. Estimated at $500/700, it sold for $2144 (with buyer’s premium). 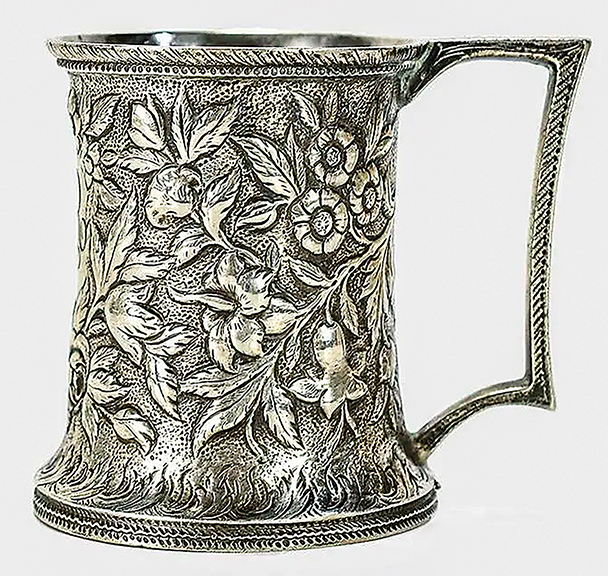 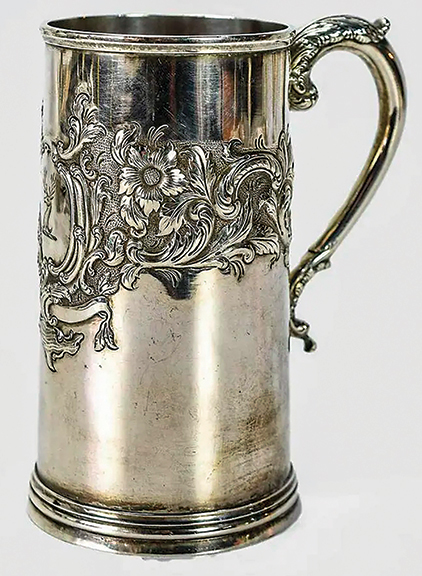 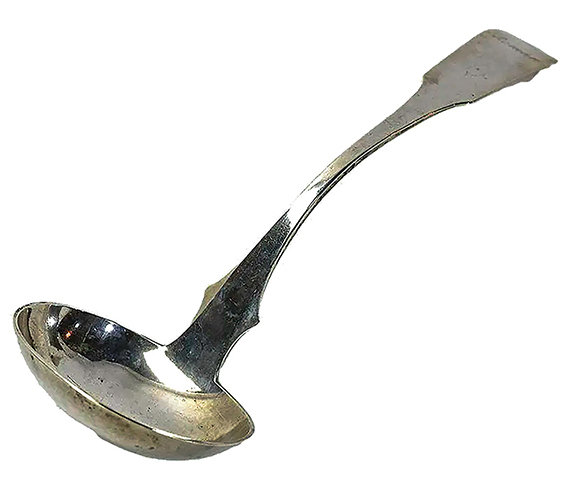 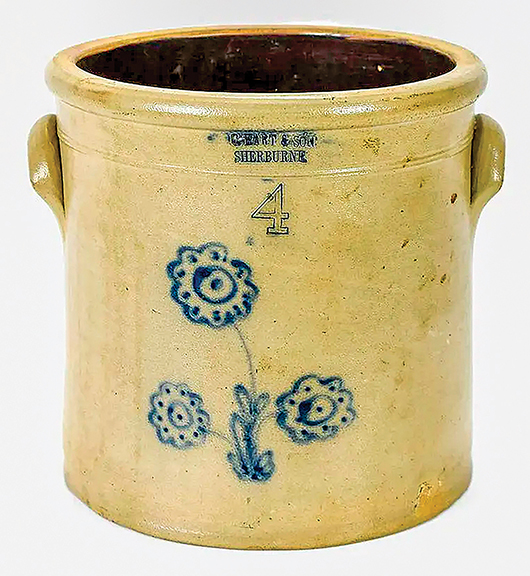 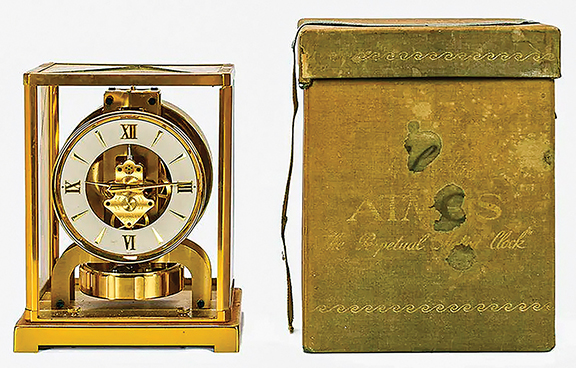 Jaeger-LeCoultre Atmos clocks are iconic examples of mid-century design. This example of “The Perpetual Motion Clock” is a model 526-5 and dates 1950-59. The clocks are designed with a sealed capsule that contains a mixture of gases that expand and contract with changes in temperature, thereby “winding” the clock. Included in this lot was the clock’s original box. The clock is untested and is missing the front glass panel, and the top and one side panel are cracked. It sold for $377.60 (est. $200/300). 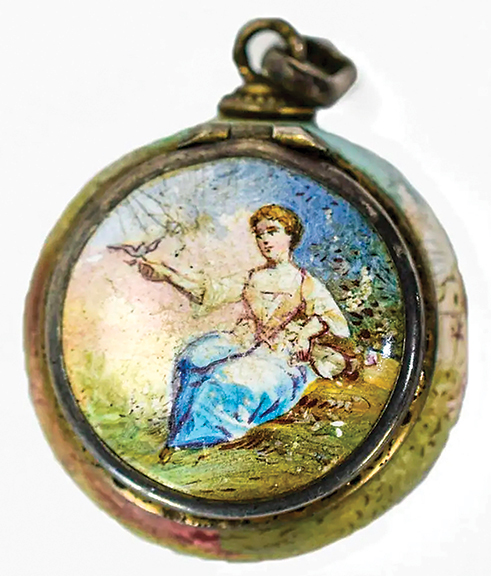 The lid of this Austrian 19th-century hand-painted silver and enamel vinaigrette shows a seated young woman feeding a bird. The back is painted with the same woman, having been joined by a man, and romance is implied. The underside of the lid displays the face and wings of a cherub. The vinaigrette is 1" diameter, and all of the interior fittings appear intact, including the sponge. The piece is marked “L P” for Ludwig Politzer, active as a silversmith and enameler during the second half of the 19th century. The little vinaigrette sold for $79.36 (est. $100/300). 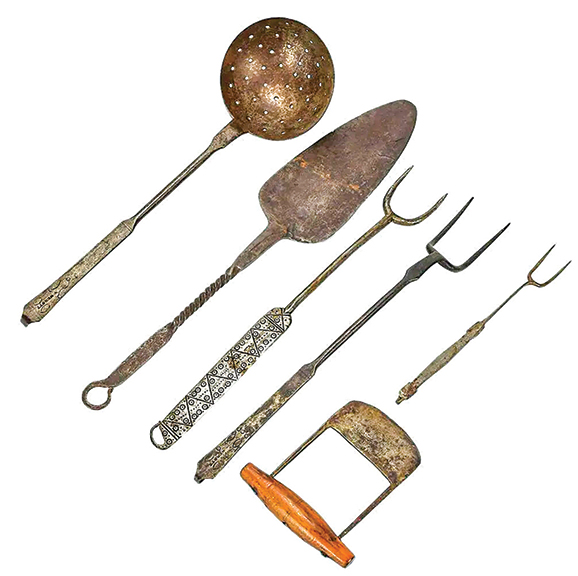 This lot consisted of six articles of wrought-iron kitchenware from the late 18th and early 19th centuries. The perforated ladle and the largest of the forks are punch decorated and marked “W. Werntz” for a Lancaster, Pennsylvania, blacksmith. The spade-shape twist-handle spatula and the ladle are each 19½" long. The group sold for $64 (est. $100/200). 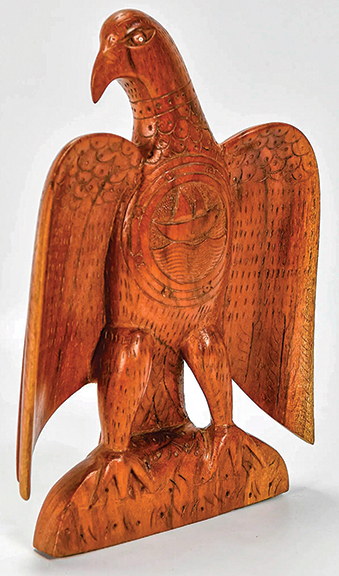 This spread-wing folk-art eagle is carved from a single plank of what appears to be mahogany. Dating from the early 20th century, it displays allover design enhancements and has a sailing ship within three concentric rings on the breast. The 12" x 8" x 1½" carving sold for $140.80 (est. $200/300). 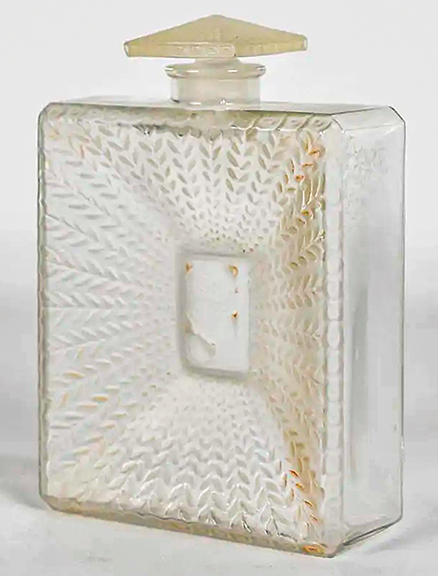 According to an auction house spokesperson, this colorless square perfume bottle was literally rescued from the trash. It is a 1925 bottle by renowned French art glass designer René Lalique (1860-1945) for Houbigant’s La Belle Saison perfume. The bottle is 5½" high overall, including the stopper. It is indented on both sides, with an Art Deco style profile in the center plaque and a pressed sprig design radiating outward. The base is molded with “Made In France.” The bottle sold for $1600 (est. $500/700).

Here is a cup and saucer from a group that included two cups with saucers and two bread plates. The undamaged pieces in green are from the Consolidated Glass Company, and the Art Deco pattern is Dance of the Nudes or Dancing Nymph. The lot sold for $64 (est. $100/200). 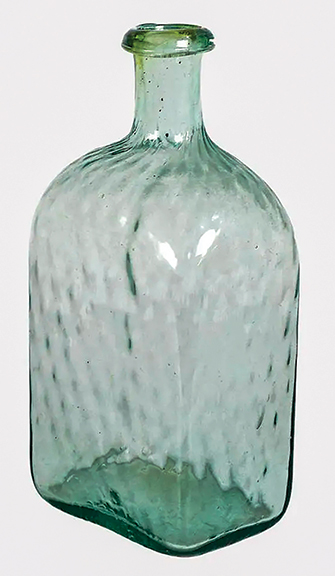 The body of this light aqua/green blown glass bottle from the first half of the 19th century displays an overall diamond quilted pattern. The rim is applied, and there is a noticeable pontil mark. The bottle stands 10" high and sold for $153.60 (est. $200/300). 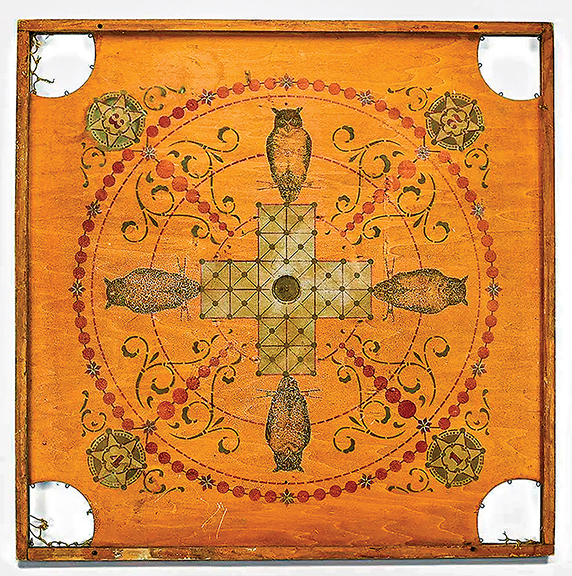 The double-sided wooden game board (one side shown) is from the Edward Mikkelsen company of Chicago. The board displays a patent date of 1901. It is marked “The Owl Game Board,” and it was advertised that it could be used for 75 different games, many of which appear to be carom-like “flick” games. The corner netting has deteriorated, but the board displays a nice overall alligatored surface. The 28½" square board sold for $71.68 (est. $100/200). 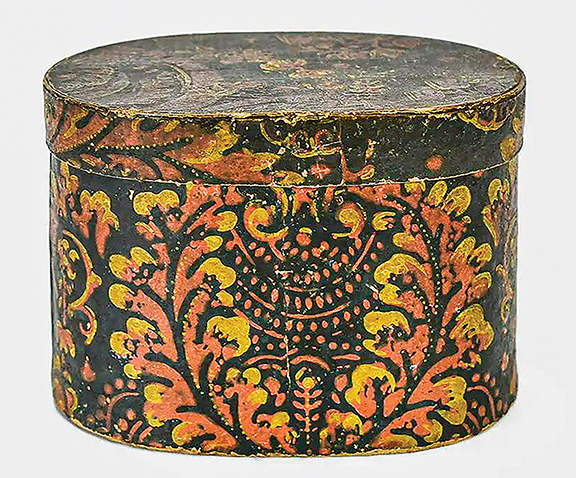 The circa 1840 blown glass trumpet vase is probably from one of the Pittsburgh factories. The deep emerald- green piece rests on a darker green, nearly black, 4½" diameter baluster-style base. The vase, 12" high overall, is undamaged and sold for $480 (est. $100/300). 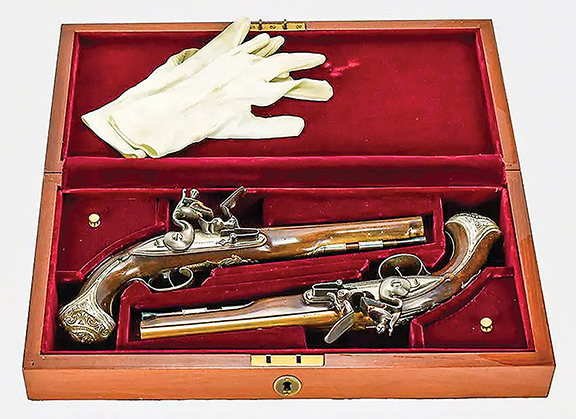 These cased silver-mounted flintlock pistols are from the United States Historical Society and were manufactured for the U.S. bicentennial. The pistols are replicas of those belonging to George Washington. These pistols are numbers 629A and 629B from an edition of 975. The set sold for $2048 (est. $1000/1800). 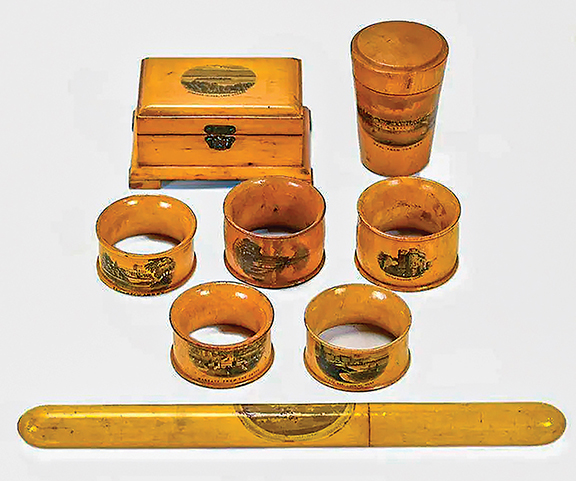 This lot consisted of eight pieces of late 19th-century Mauchline ware. There are five napkin rings, a needle case, and two boxes—one a tall cylindrical box and the other rectangular. Each of the pieces displays a transfer-printed scene. The scenes are locations and attractions in the United Kingdom, with the exception of the rectangular box, which depicts Diamond Island, Lake George, New York. The 9½" long etui is the largest piece. The group sold for $64 (est. $100/300). 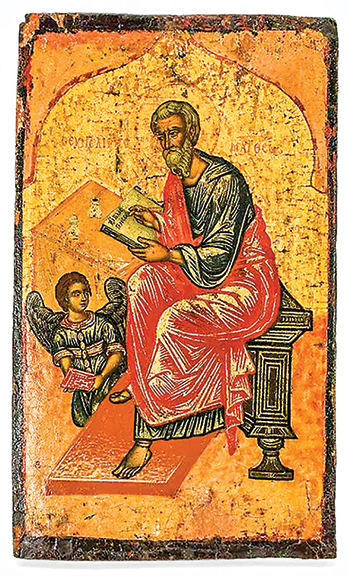 The Greek 19th-century icon-style painted wood panel depicts a scribe or holy man at a desk with an angel at his knee. Two words are written in the scribe’s book. The lettering behind the figure is illegible. The 16½" x 9½" panel sold for $448 (est. $100/300). 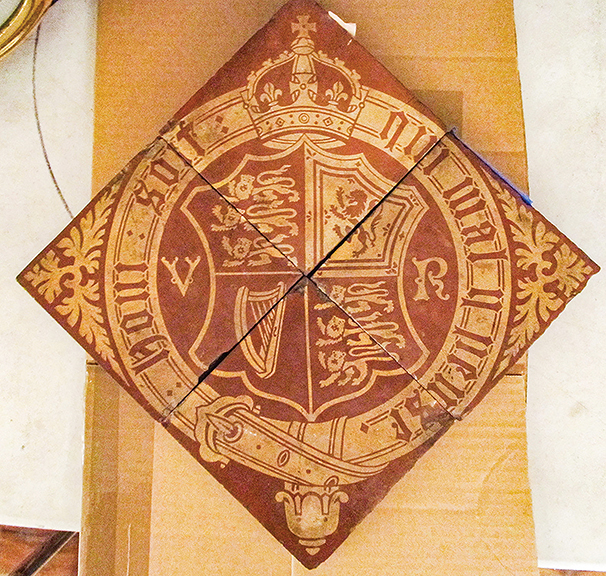 These four 6" x 6" earthenware encaustic tiles from the British firm of Maw & Co. date from the second half of the 19th century. The patterns of encaustic tiles are achieved from different clay colors rather than being applied as a glaze. This group forms the heraldic arms of the Most Noble Order of the Garter, the most senior order of British knighthood. This variation of the order’s arms is that of Queen Victoria, displaying “V R” (Victoria Regina) flanking the central shield that is quartered and decorated with symbols of England, Ireland, and Scotland. The shield is encircled by a garter belt that is printed with the order’s motto, “Honi soit qui mal y pense,” which translates to “Shame on anyone who thinks evil of it.” This very interesting lot sold for only $64 (est. $100/200). 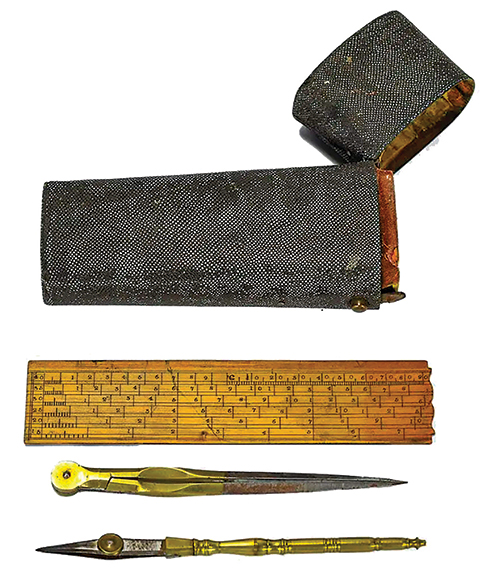 Here is a partial traveling set of draftsman’s or cartographer’s tools. The shagreen case contains a fine-point brass-nib ruling pen, a combination scale/rule, and a set of brass dividers. The set is not marked but was likely manufactured in France in the late 18th or early 19th century. The partial set sold for $76.80 (est. $200/300).