The 2022 Antiques in Manchester: The Collector’s Fair

“It’s a major show, during a major week, and people get on airplanes to come here.”

Those words came from Christopher Settle, a Newton, Massachusetts, furniture dealer, explaining why Antiques in Manchester: The Collector’s Fair is the only antiques show he does.

A major component of Antiques Week in New Hampshire, the show—a visual delight—opened on Wednesday, August 10, at 10 a.m. to a throng of collectors and dealers eager to shop the 61 dealers set up in the Sullivan Arena on the campus of St. Anselm College in Manchester, New Hampshire, a welcoming facility that offers plenty of parking, roomy aisles, and air-conditioning. The show continued August 11. 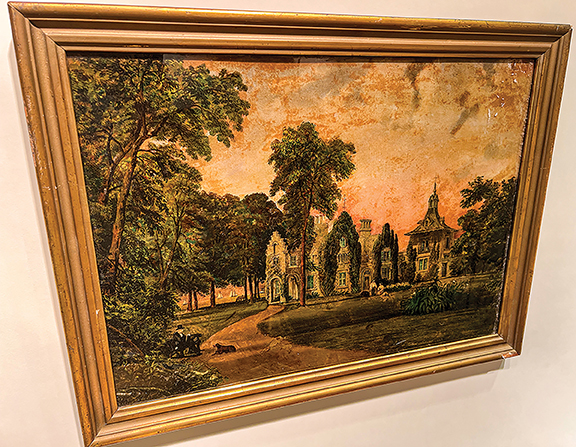 A reverse painting on glass depiction of Sunnyside, the home of author Washington Irving in Tarrytown, New York, was $750 from Joy Hanes of Hanes & Ruskin Antiques, Niantic, Connecticut. The source is the Currier & Ives print Sunnyside on the Hudson. The painting sold to a collector who lived around the corner from Irving’s home. 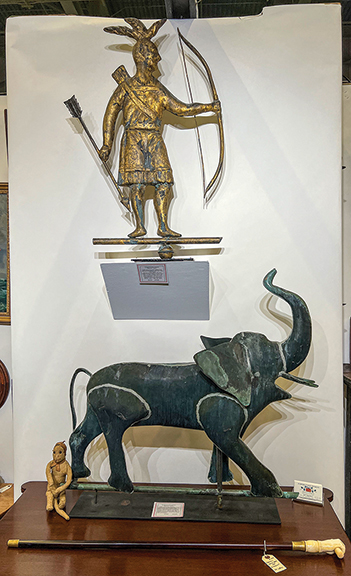 Dennis Raleigh and Phyllis Sommer of Searsport, Maine, offered the rare large Massasoit weathervane by Harris & Co., circa 1885, and it sold quickly. The hollow-body elephant weathervane, originally from Benson’s Wild Animal Farm in Hudson, New Hampshire, was $12,500. The park was in operation from 1926 to 1987.

“It went really well. I was happy with everything,” said Karen DiSaia of DiSaia Management, the producer of the show. “I think the dealers did a spectacular job, bringing really good stuff. It was edited well; it was presented beautifully.”

With the COVID-19 crisis now in a more manageable stage, people came out. “The gate was up from last year,” DiSaia said five days after the show had closed, noting that she hadn’t finished counting the complimentary tickets. “The numbers don’t matter as much as the quality of buyers, and I think we attract excellent buyers.”

Sheffield, Massachusetts, dealer Samuel Herrup said, “I thought the Collector’s Fair went well. Good crowd, good material, and I had good sales. It was on a par with pre-COVID years.”
Ann Wilbanks of Find Weatherly, Westport, Connecticut, exhibiting for the first time at Antiques in Manchester, said, “Of course I’m prejudiced because I love folk art and Americana, but I truly believe this show has the most consistently outstanding level of inventory of any show I’ve ever done. These dealers and their offerings have inspired me to work even harder towards the 2023 show.”

“I have only positive things to say,” said Joy Hanes of Hanes & Ruskin, Niantic, Connecticut. “Karen’s management is exemplary, with no apparent hitches that I could detect. Upon opening, the usual storm of customers arrived and purchased great antiques. We were busy both days. As expected, the bulk of sales happened during the first few hours, but the crowd continued to hang around to schmooze and make purchases for most of the afternoon. Thursday was quieter, as expected, but sales were still good throughout the day. The show is always fun because so many people come from far away. I even heard from a customer in Nebraska (by phone) who wound up purchasing two marine paintings, two Sunderland jugs, two silhouettes, and one candlestand.”

Lisa McAllister of Clear Spring, Maryland, said, “For me, business was good, although people are hesitant with spending. Karen is a star—she really has people in mind and not just the dollar. She takes care of us, and the customer. Some folks said how much they appreciated the lack of a ‘rush’ to get them to buy.”

Because new locker rooms were built in the arena, DiSaia had to adjust her floor plan. If she wanted the first group of buyers to wait comfortably inside before the show opened, the line had to move from where it had traditionally been to the upper level of the arena. That meant the initial entrance to the show was down the arena stairs, a prospect that DiSaia said kept her up at night.

“People were really good about it,” she said. “They followed the rules. Nobody went charging down the steps like a maniac. And we had an elevator for people who couldn’t do the steps.”

Several dealers said the entrance change cut down on the first rush into the show, but DiSaia countered that it only took slightly longer for everybody to get in. “I was worried about the new entrance, but everybody got in about the same time as when they come in the front door. It was maybe three or four minutes longer with people having to go down the steps. We handled it in a very orderly way, and people were appreciative of that.”

There was some chatter that DiSaia has been trying to sell the show, but she emphatically shot that down for the record. “I am not trying to sell the show. I love what I do,” she said. “This was a creation that we made ourselves. It was done at the behest of a group of dealers. I feel like I work for the dealers, and I wouldn’t consider selling the show without talking to that guiding group of dealers. If I didn’t do any other show all year, I would do this one because I love it.”

DiSaia said her favorite comment came from an Illinois collector who told her, “This is one of the best shows I go to—not only because of the merchandise but because of the way I feel when I’m here.”

“That is what I’m going for,” DiSaia said.

Michel Felice Cornè (1752-1845), The Ship “Mount Vernon” Engaging French Privateers, casein on canvas, 18" x 24", was offered by James Kochan of the Mars and Neptune Trust, Wiscasset, Maine, for $60,000. The Mount Vernon was built in Salem, Massachusetts, for Elias Hasket Derby; the 355-ton ship was launched in 1798. The Mount Vernon undertook a trading voyage to the Mediterranean in 1799-1800 and was attacked off Algeciras Point, Spain, by a large privateer. Cornè arrived in Salem from Naples, Italy, in 1800, brought over by the Mount Vernon. He paid for his passage by painting for Captain Elias Hasket Derby Jr. several views of the ship, including this one. Two smaller but similar views of the same scene by Cornè are in the collection of the Peabody Essex Museum.

This circa 1910 carousel rounding board fragment with a rhinoceros wading in a tropical landscape was $7500 from Tambor Art and Antiques, New York City. A note said it was from the Tony Orlando collection. 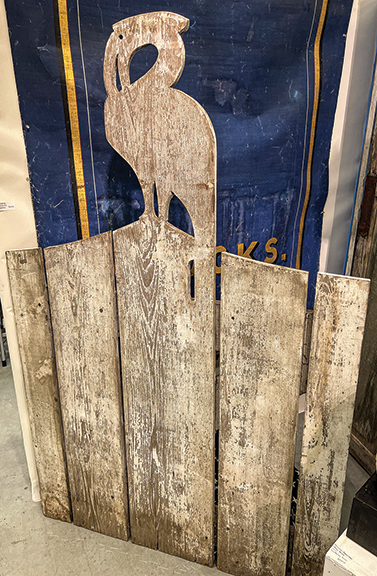 The white-painted wooden garden gate with a prehistoric-looking bird is from Connecticut and was $3200 from Aarne Anton of Nexus Singularity, Pomona, New York. “I came away happy to have done the show and see old friends and clients. I made some money but less than some past shows in New Hampshire. I’m happy to say I bought more than I sold at the three shows I attended. That says a lot about my passion for folk art,” Anton said. “Karen does a fantastic job with the show—the crowds of people were there, with many old-time collectors. The problem with old collectors is they have limited space and are super selective.”

The cherry bonnet-top chest-on-chest, Woodbury, Connecticut, 1770-80, was priced at $65,000 by Roberto Freitas American Antiques & Decorative Arts, Stonington, Connecticut. According to the tag, it descended in the Stiles family of Woodbury through Benjamin Stiles to his granddaughter Alice and then to her cousin’s son, a descendant of Abel Stiles, in 1920. It has a closed bonnet top with flame finials, a distinctive center plinth with a double scroll, an elongated, deeply carved shell on the center drawer, reeded pilasters, a scalloped skirt, and cabriole legs with ball-and-claw feet. It measures 94½" x 42½" x 22". A closely related chest-on-chest, also with a Stiles family history, is in the collection of Colonial Williamsburg. 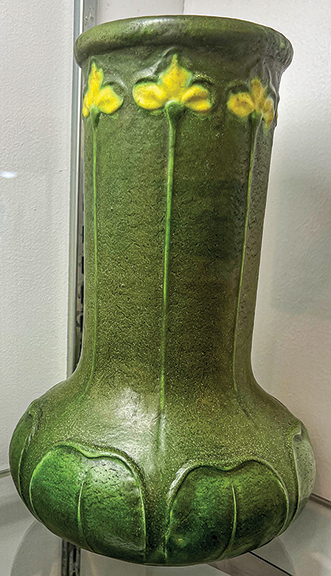 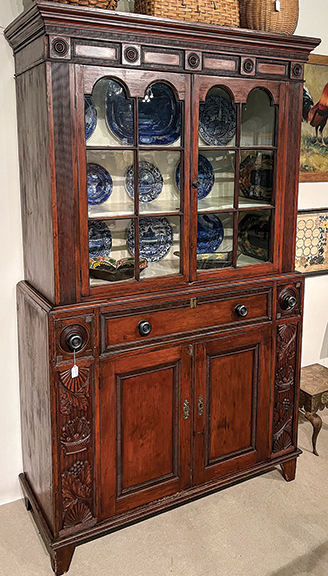 This Bergen County, New Jersey, cupboard, 1815-25, has wild carving and was $6500 from Daniel and Karen Olson of Newburgh, New York. It sold. 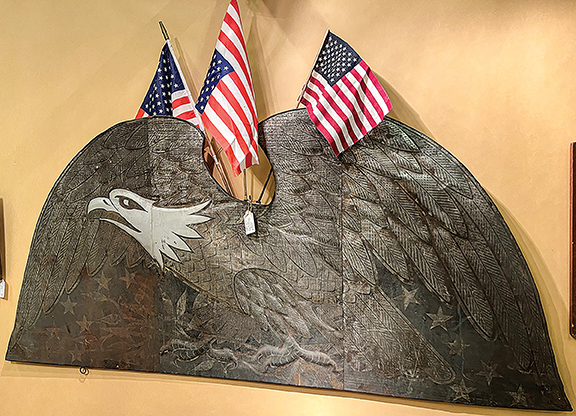 The embossed tole painted eagle flag holder, 32" x 70", from Port Atkinson, Iowa, was $3500 from Derik Pulito of Kensington, Connecticut. “The attendance was great, especially the second day. I had several sales on both days. People were enthusiastic and positive and wanting to purchase early Americana and related accessories and paintings,” Pulito said. 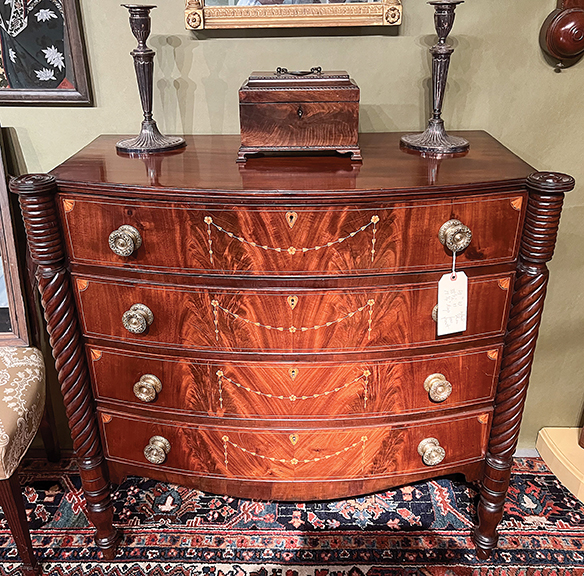 Thomas Schwenke of Woodbury, Connecticut, asked $5800 for this four-drawer bowfront chest, 38½" x 41" x 19¼", with unusual inlay. Schwenke thought it might be by Thomas Nisbet (1777-1850) of St. John, New Brunswick, Canada. Schwenke commented, “The show was a great one, with tons of really fine material. Business was modest, as expected.” 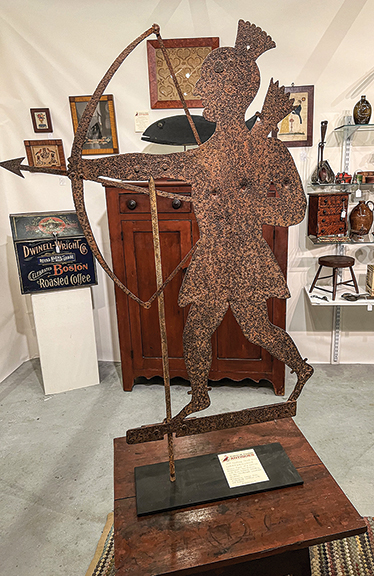 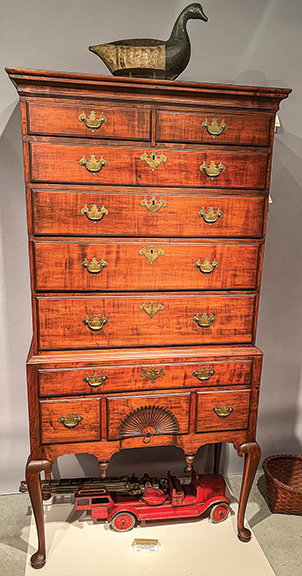 Circa 1770 flat-top highboy with a carved fan and long cabriole legs ending in pad feet, all original, including the brasses, $16,000 from J & G Antiques, Amityville, New York. The root-head brant by David Henry Cochran of Blue Point, New York, is in its original paint and was part of W.L. Suydan’s hunting rig. 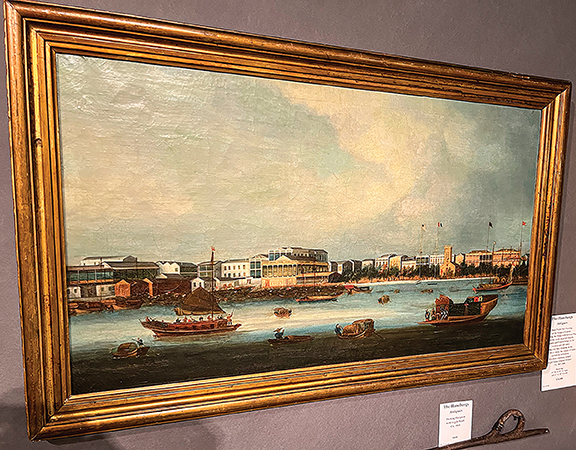 The China trade painting of the hongs at Canton with national flags, including the rarely seen Danish, Spanish, and French hongs, 1847-56, 21" x 30" (sight size), was $20,000 from the Hanebergs Antiques, East Lyme, Connecticut. Robert Haneberg said, “Karen does a great job. We had great sales across the board, furniture, art, folk art, and smalls.” He noted that this year they saw many more customers who had traveled greater distances than last year and saw people from Oregon, California, Colorado, and other places. He attributed that to less fear of flying because of COVID-19 getting under control. 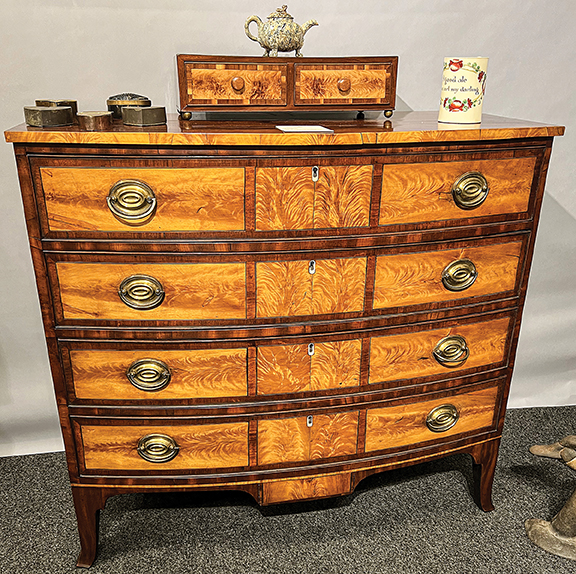 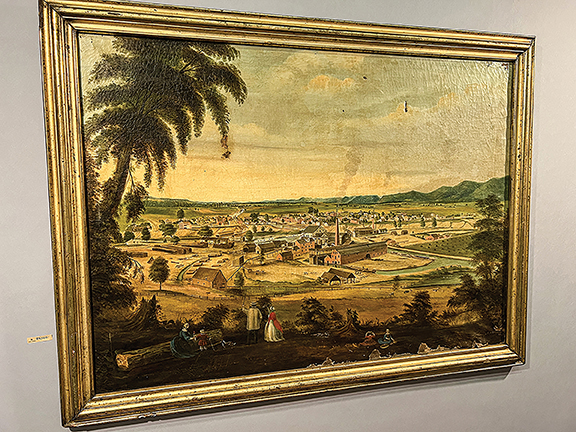 The view of Waverly, Ohio, by Richard H. Sheppard (1819-1895), oil on canvas, 32¾" x 45" (sight size), was $80,000 from Clifton Anderson Antiques, Lexington, Kentucky. The painting depicts entrepreneur James Emmitt (1806-1893) with his cane raised, accompanied by his wife, Louisa, grandchildren, and perhaps a daughter-in-law. Emmitt commissioned Baltimore, Maryland, ornamental artist Sheppard to paint the portrait of his town, Waverly, which the artist signed and dated 1859. A year later Emmitt persuaded the Ohio legislature to move the county seat of Pike County from Piketon to Waverly, and Emmitt gifted the land to the city that year for the courthouse and constructed the new building in 1862 at his own expense.

Anderson said this was his first New England show and that it was the best managed he’d ever exhibited at. He said he’d made the most sales of any show in his 49 years of exhibiting. “Brought all my furniture back home, which was not unexpected though disappointing from a load-out perspective.... Enjoyed seeing old friends and the local cuisine.” 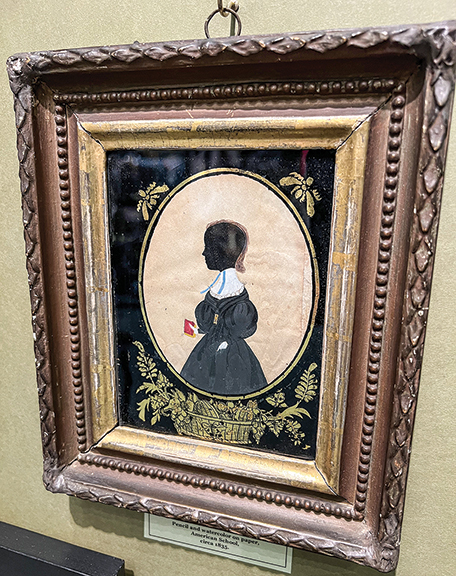 The circa 1835 profile portrait of a young girl, pencil and watercolor on paper, the portrait 41/8" high (9¼" framed), shows a girl with a hollow-cut head in profile in a black puffy-sleeve dress with a gold belt buckle, a white collar, and a blue bow, holding a red book with white gloves. The oval portrait is set within an ornate black and gold églomisé mat. It was $2500 from Elle Shushan of Philadelphia, a specialist dealer in portrait miniatures. 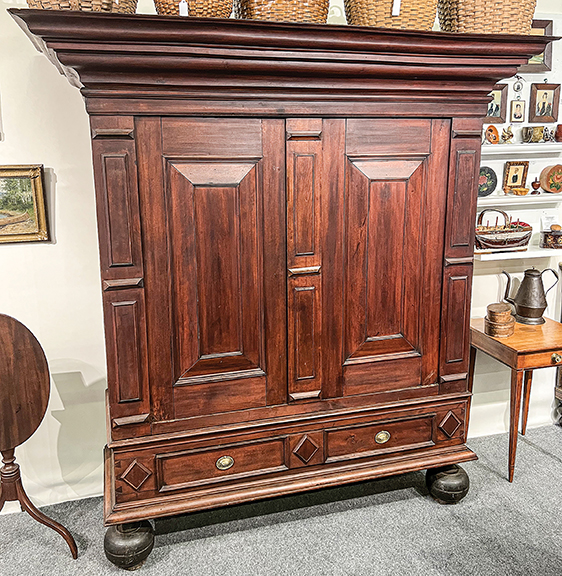 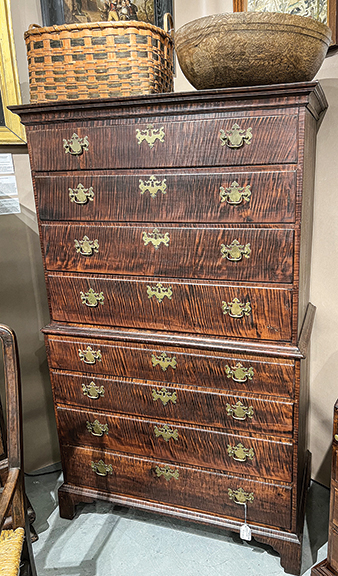 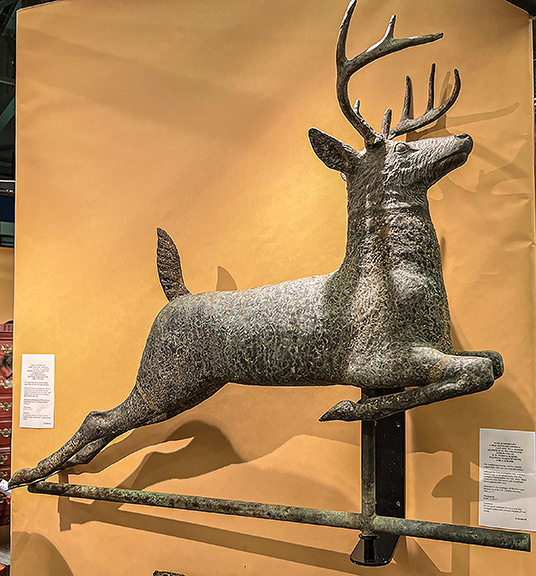 The repoussé copper and cast-zinc leaping stag weathervane, attributed to L.W. Cushing & Sons, Waltham, Massachusetts, is much larger (36" x 48½") than most examples. It was $48,000 from Heller Washam Antiques, Portland, Maine. The 1870-90 weathervane with a hollow-molded copper body with “hairy” detail and cast-zinc head and antlers is one of few known and would have been a special-order item. It is in very good condition with a verdigris surface with remnants of the original gilt and sizing. 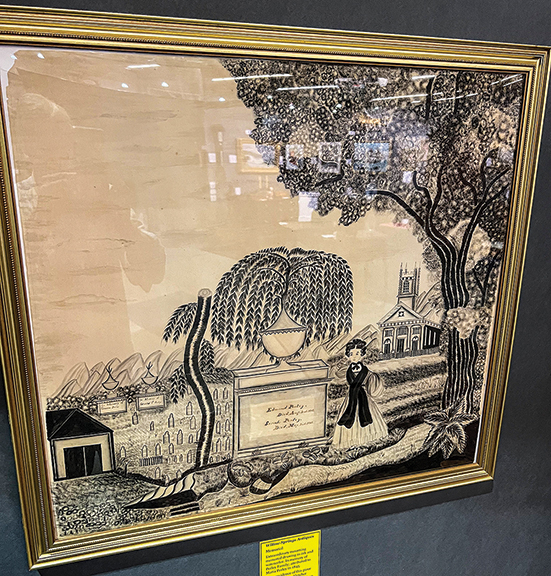 The mourning picture in ink and watercolor is in memory of the Perley family and attributed to Maria Perley in 1845. Ex-Nina Fletcher Little, it’s shown in her 1984 book Little by Little: Six Decades of Collecting American Decorative Arts (p. 143, fig. 189). Measuring 21" x 23", the work was $4500 from Willow Springs Perennial Antiques, Rexford, New York.